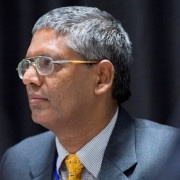 Summary on  Responsibilities and Research Activities

Tanka Nath Dhamala received his Master’s degree in pure mathematics with Chancellor Gold Medal from Tribhuvan University, Nepal in 1989 and M.Sc. nat. in Industrial Mathematics from University of Kaiserslautern, Germany in 1996. He completed his PhD in the field of Optimization from University of Magdeburg, Germany under the supervision of Prof.  Heidemarie Braesel in 2002. He is a Post-Doc fellow in Optimization  from Memorial University of Newfoundland, Canada under the supervision of Prof.  Wieslaw Kubiak in 2004-2005.

Dr. Dhamala has visited research institutes including DIMACS (Center for Discrete Mathematics and Theoretical Computer Science) and RUTCOR (Rutgers Center for Operations Research) in USA under the invitation of Prof.  Fred S. Roberts in 2003. He also visited the MDMC (Multi Dimensional Mobile Communication) Lab in Chonbuk National University, South Korea as a visiting professor under the invitation of Prof. Moon Ho Lee. He visited Japan as an education tour earlier in 1989 and  visited  France, India, Sri-Lanka, Philippines, China, Luxembourg, Malaysia and Myanmar for various scientific meetings. He has visited most of the places of Germany, mainly the University of Magdeburg and University of Kaiserslautern as his scientific homes.  He received TWAS (Thirld World Academy of Sciences) Award from Nepal Academy of Science and Technology in 2003 and NAST NABIL Science and Technology Award in 2016.

Prof. Dhamala is a Georg Forster Research Fellow for Experienced Researcher under Alexander von Humboldt Foundation sponsorship in Kaiserslautern in Germany with Prof. Horst W. Hamacher in between 2012-2014. He is a former German Academic Exchange Service (DAAD), Germany and NSERC (Natural Sciences and Engineering Research Council of Canada) fellow and is currently the DAAD  Research Ambassador from 2015. As German academic collaboration, Prof. Dhamala coordinated the DAAD Partnership program with Prof. Hamacher at University of Kaiserslautern and also for Alexander von Humboldt Foundation Research Group Linkage Program with Prof. Stephan Dempe at TU Bergakademie Freiberg  in Optimization and Graph Theory established since 2016 in Central Department of Mathematics. He was the Steering Committee Member of Silkroad Mathematics Center, Beijing, China.

Prof. Dhamala has published a number of papers in the journals of repute, organized national and international conferences and workshops, and has been the editors, chief-in-editors (formerly: International Journal of Operations Research, Nepal, and Journal of Nepal Mathematical Society, and currently: The Nepali Mathematical Sciences Report) and reviewers of the scientific journals including AMS Review, zbMATH, Journal of Advanced Transportation, Hindawi and ANNOR. He has been academically affiliated in many academic organizations in Nepal and abroad like AMS (American Mathematical Society), NEGAAS (Nepal German Academic Association), GAAN (German Alumnai Association of Nepal), ORSN (Operational Research Society of Nepal), MCDM (International Society of Multi Criteria Decision Making), Humboldt Club Nepal, NAST and NMS. He is also serving as a member of different research and subject committees.  He is  the former President of Nepal Mathematical Society from 2015 to 2018 and the Former Secretary of NMS from 2006 to 2009.

Mathematical modeling and solving the real-life problems using optimization, simulation and heuristics are the main concern of Prof. Dhamala. The most focused areas of his research include shop scheduling theory and algorithms, graph algorithms, JIT sequencing, vehicle routine, network optimization, facility location and logistic support problems. The current research area concerns on solving emergency evacuation planning optimization problems. Both auto-based and transit based  models and contraflow problems are focus of his research group. Including all disaster scenarios over the world, one of the potential areas for their implementation would be Kathmandu, Nepal. The models are also applicable in everyday rush-hour traffic.  A collaborative research is his vision.
Links: ResearchGate; HumboldtLifeNetwork; GoogleScholar; LinkedIn;GoogleSite;